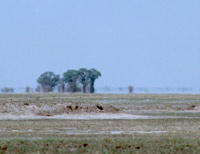 'This painting is of a place in Botswana that has very good memories for me. I have painted the group of Baobabs known as the Seven Sisters (sometimes known as Baines Baobabs) several times but this particular work depicts a scene I saw when I made my second visit to this fabulous location in December 1980 when I camped there for several days. This iconic group of baobabs was just visible from he old Maun-Nata road and I knew there was a very faint track leading off over the grassy plain towards them where they stood isolated on the edge of a vast salt pan called Kudiakam. It took me a while before I could locate that track which I had used earlier in the year, it was mid-day and very hot and the group of baobabs looked like mirages on the horizon. I knew that the best shade was far out on the plain and underneath those huge baobabs. When I eventually found the track I set off along it and over the grassy plains that surround the whole of the Kudiakam Pans. The track to the trees is very circuitous, and winds its' way hither and thither across a vast grassy plain, taking advantage of a route that requires only short dips down on to the salt pan surface (which in the rainy season can be quite treacherous.) As I got closer to the baobabs I was surprised to discover that I was not the only one headed in the direction of the shimmering mirages. Two San hunters riding donkeys appeared from nowhere and I could see they were headed in exactly the same direction as I was. We all ended up camping together underneath the baobabs that night. They told me they were headed up to Khamakhama Pan. This is a large grassy plain North East of Nxai Pan wherethey intended to spend some time hunting Khamakhama because the Game Department never sent patrols there. By the time I woke up the next day they were already long gone.'