Together with his new business partner, author and adventurer Bill Travis, my father operated his engineering company Martin & Paul Kenya Ltd. out of a small office on the square right next to the arched gate leading down to the Dhow Harbor. They could see dhows coming and going from their office window. I liked to think that he was reminded of me because my name was right there on the company logo. Who knows?
In 1960 a school friend showed me a Mombasa Times article about Bill Travis and my father salvaging huge, ancient tusks of ivory that they had found on the seabed of Mombasa's Old Harbor. This was exciting stuff for a schoolboy and I was proud to see my father's name in the newspaper. The article had several photos of Bill but disappointingly there were no photographs of my father. I was curious to see what he looked like because I had no photographs of him. My mother had torn those up years earlier.
Although I only met my father once in the entire time we lived in Mombasa I saw Bill Travis often. He was was nice to my mother, several occasions taking us to tea at the Copper Kettle Cafe on Kilindini Road. Once my mother tasked me to deliver a letter to my father at the Martin & Paul site office hut south of Fort Jesus. She told me that he knew that I was coming by to deliver her letter. The site office was located in a hut on the cliff above the huge wastewater outlet they were building beneath the Ras Serani ruins on cliffs near the golf course. Expecting to have a rare meeting with my father I was disappointed to find that only Bill was there. He took the letter from me and then showed me how to blow a huge crack in a nearby coral outcrop with a blasting cap and det-cord. It is easy to entertain a small boy with something that involves a loud explosion. I went home happy.
The Show: 14 ► 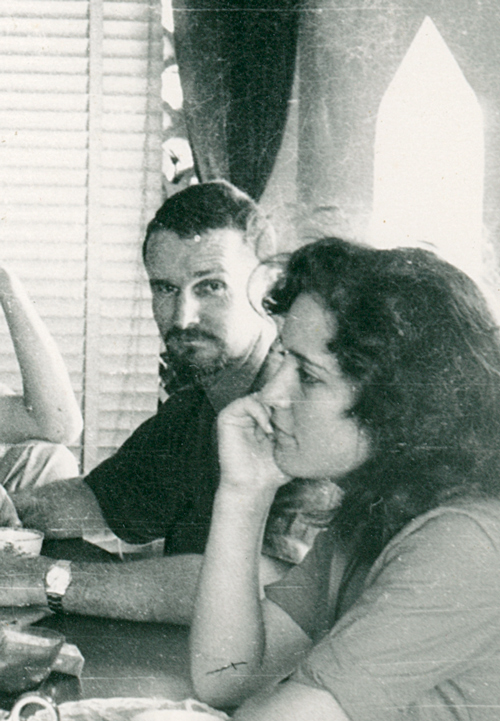 2/10 The location of Fort Mansions and the Ivory Room 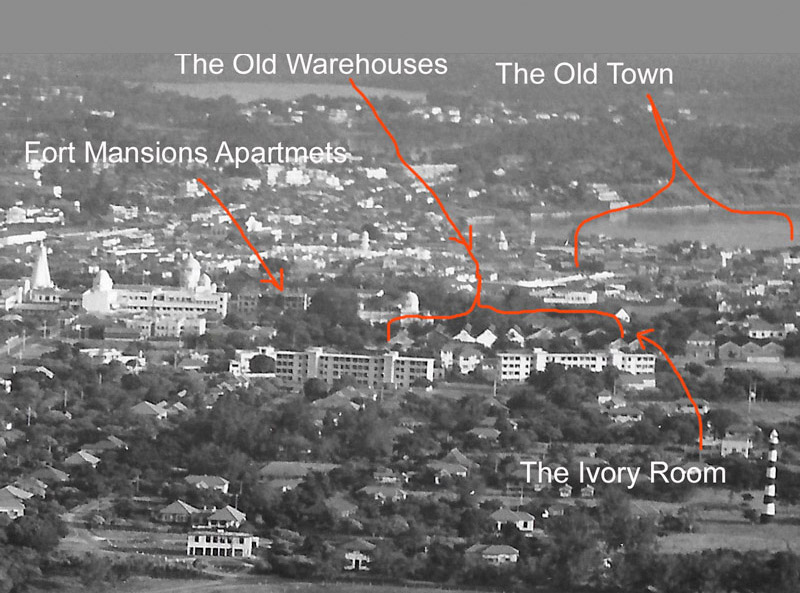 3/10 Martin & Paul work site at Ras Serani, Mombasa. Once my mother sent me here with a letter for my father but he was away. Instead Bill showed me around 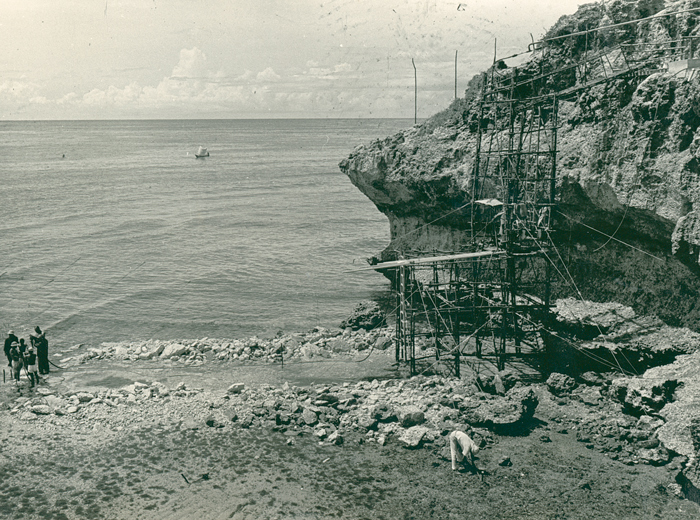 4/10 M & P were specialists at underwater engineering. My father with a drill on the sea floor 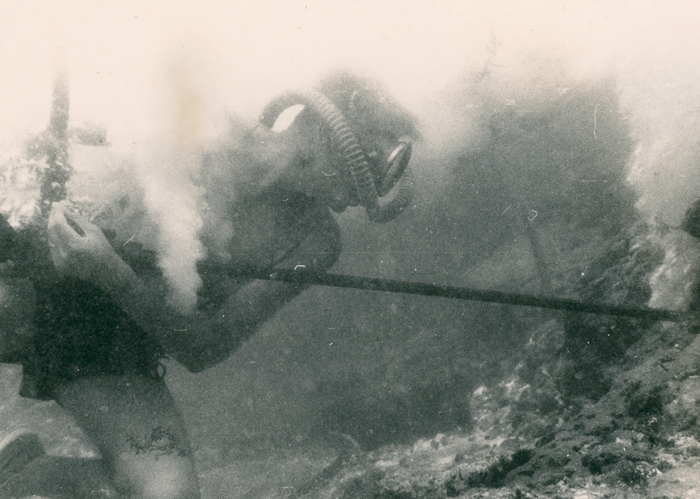 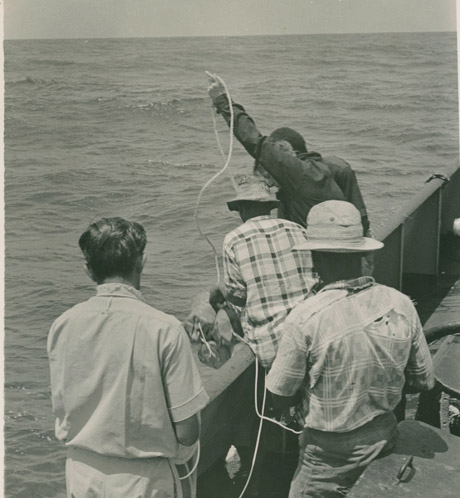 6/10 He discovered tons of ancient ivory. 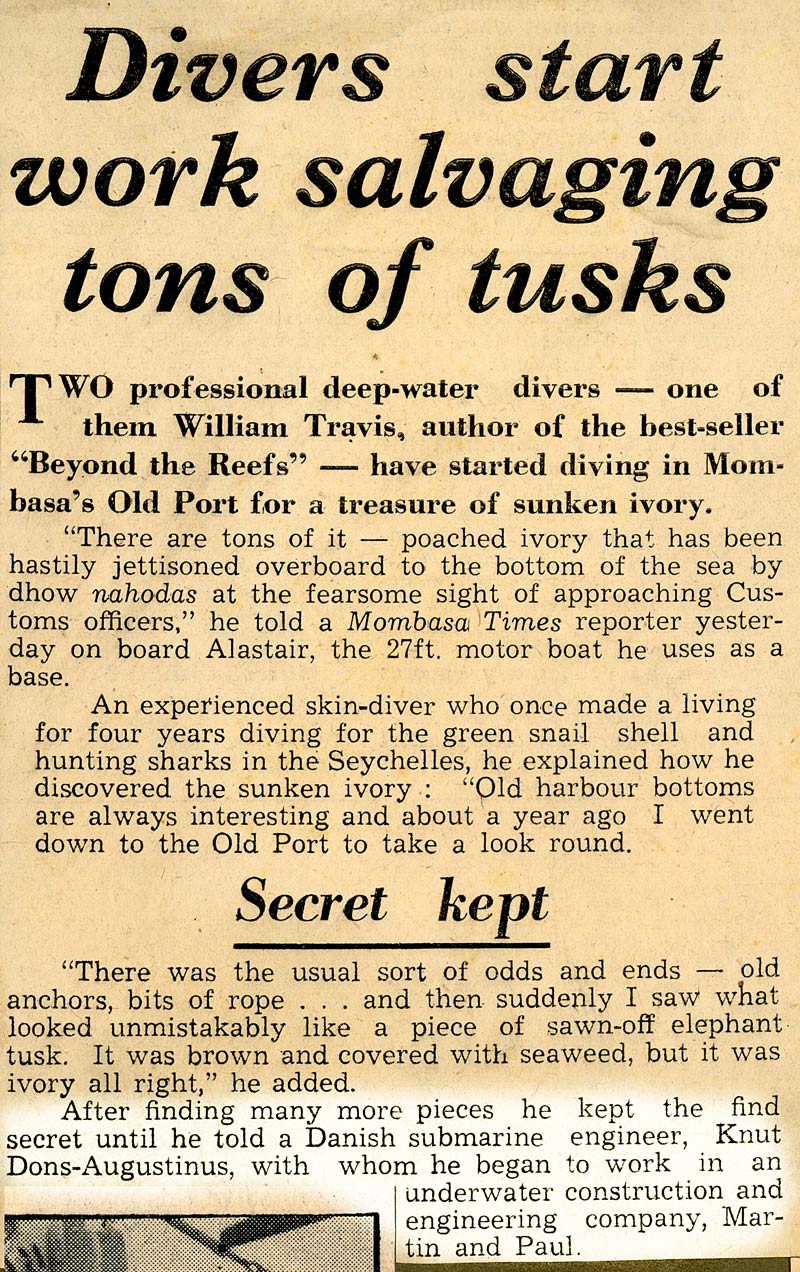 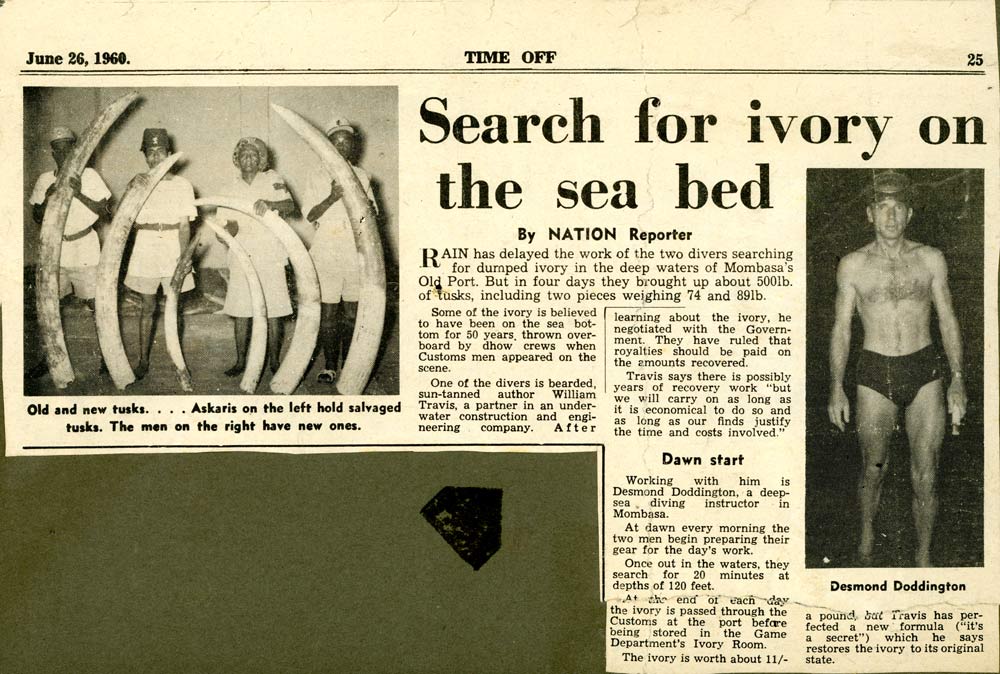 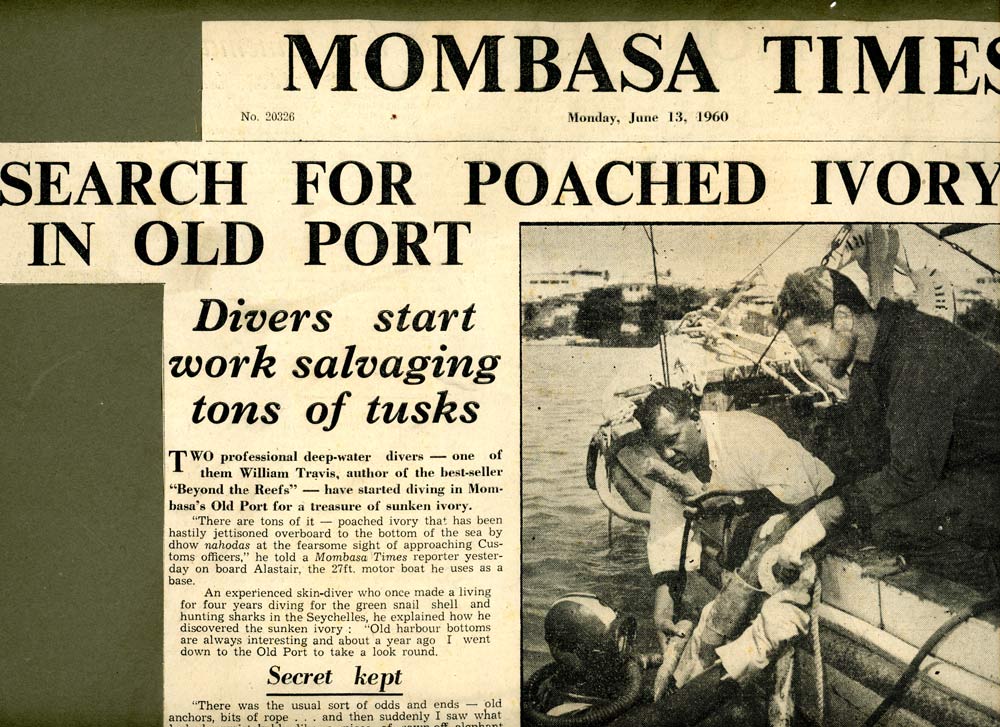 9/10 The Ivory room and confiscated poached tusks from Tsavo. This shed was a block away Fort Mansions(Image courtesy of Juanita Carberry.) 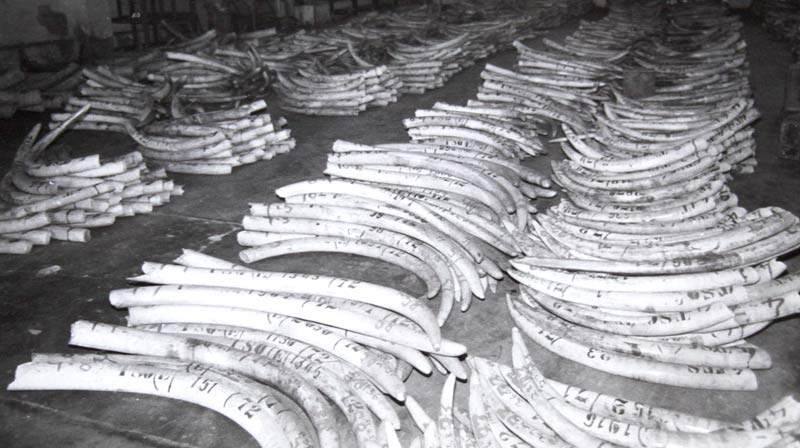 10/10 In 2010 I painted Mvita street where the Ivory Room used to be located near the Lotus Hotel. It was unchanged from the 1960s! 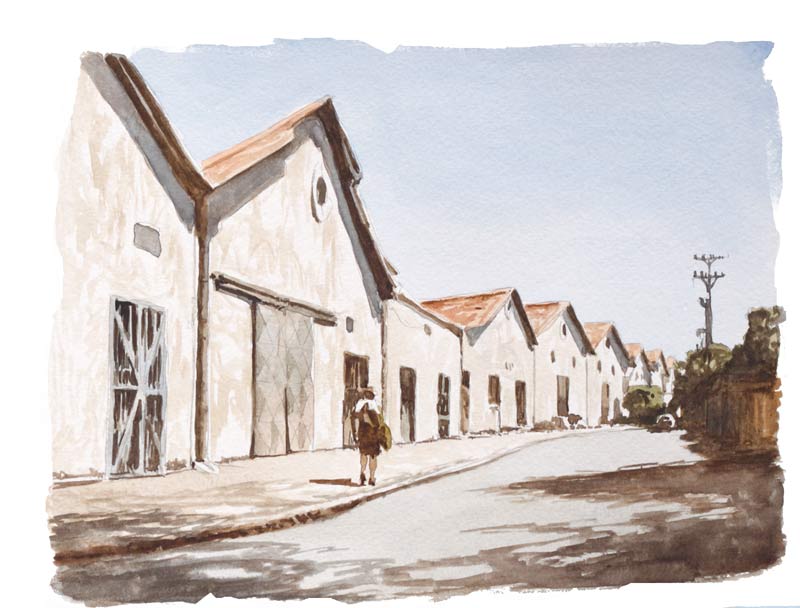 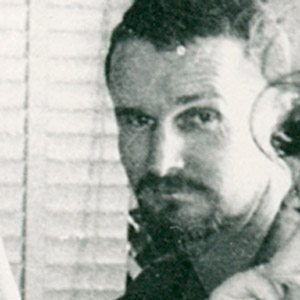 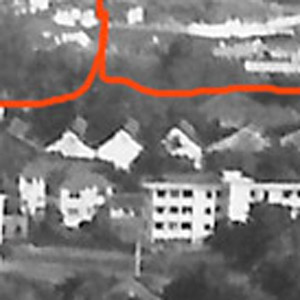 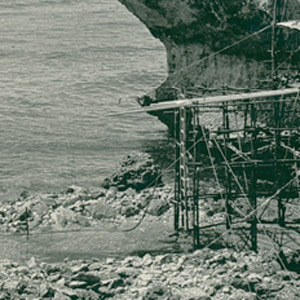 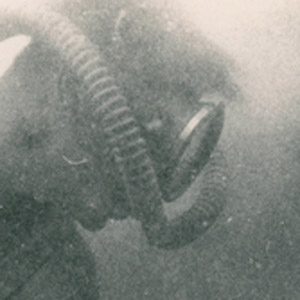 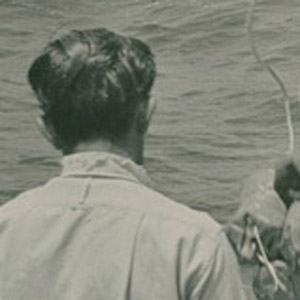 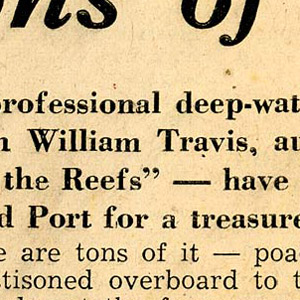 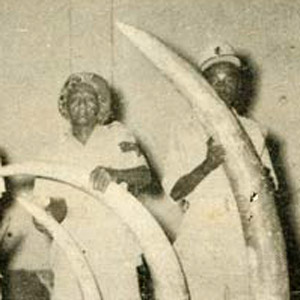 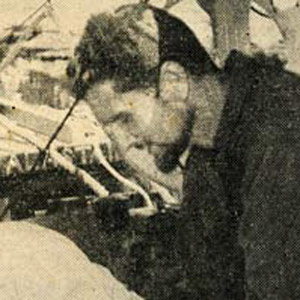 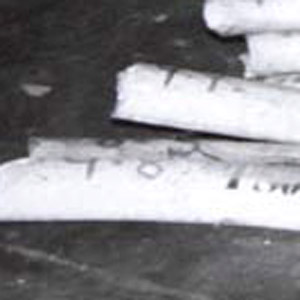 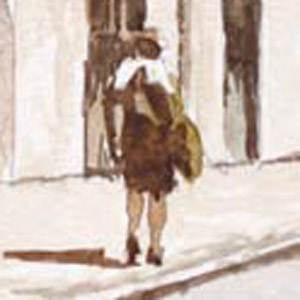