The Show: 28
THE GRAVEYARD

When Clarissa and I returned from Mombasa I felt very satisfied and quite nonchalant about my upcoming show. Most of the paintings were now with the Everard Read Gallery and the date of the opening loomed ever closer. My catalog essay was nearly complete but it needed a good ending. From my conversations with Jackie I discovered that my father had been the Danish Honorary Consul in the Seychelles for many years before he died in 1988. In Jackie's package there was a photograph of his grave in the Seychelles. I knew that visiting that grave would provide a good ending to what I was writing for the catalog! Clarissa agreed, but again she was not convinced by my nonchalance when I talked about these things. We decided to go there and find his grave. I tried to get Jackie to come along with us but she decided not to. "Too many painful memories," she said.
When we arrived in the Seychelles we hired a guide and described to her my plans to visit Mont Flourie cemetery during our stay. Hopefully to find my father's last resting place. The guide then carefully explained to us that we might never find the grave. This depended on what arrangements had been made at the time of burial. If a grave was left untended for more than a few years the authorities often removed the remains and re-allocated the site. This was news that I did not want to hear! To get so close to something that I needed to happen and then be told that it might not - this filled me with an unexpected dread.
That night I was unable to sleep and dawn found me impatiently pacing back and forth along our hotel veranda. At midday we met up with the Danish Consul, Basil Soundy. Over lunch he explained that he had known my father for years before becoming the Danish Consul himself. He told me that when my father returned from cancer treatment in Johannesburg in 1988 he had mentioned he had been to see show of his son's paintings. Basil Soundy told me this news was a surprise to him because my father had never previously mentioned the existence of a son. Mentally I quickly worked out that this referred to my very first show at the Sanderling in Johannesburg. I was incredulous! "He was there?"
Then he asked me a question. "Do you know that your father had a title?" When I shook my head he continued, "Yes, he was a Knight of the Royal House of Danbrog! He was knighted by the Queen!"
After lunch there remained one thing left for us to do - something the thought of which sent waves of goose bumps up my spine. My heart quickened as our guide drove us up the winding hillside road to the vast cemetery at Mont Flourie. Jackie had given me a rough description of where she thought the grave would be found. With her photograph of the grave in hand we searched for two hours and found nothing. We climbed up and down the slope of the hill looking for a grave like the one in our photograph. To cover more ground we then split up but to no avail and another hour passed by. Dark rain clouds passed overhead and splashed the cemetery with raindrops. That was when the last vestiges of my self-professed nonchalance vanished. I felt a genuine stab of fear. Hazy memories clouded my concentration for a few minutes. Disturbing images of a black dog, my mother, father and Mombasa flitted through my mind. Was this going to be how it all ended? Was my father again missing a fateful appointment with me as he had at Ras Serani or the Sanderling Gallery? Standing on the ridge I realized I was surrounded by countless old headstones and was almost at the point of giving up the search. Then the clouds passed by and the sun came out. I looked looked down at my feet and I saw that I was literally standing on my father's grave. Now weather-beaten and overgrown, it was nothing like the fresh, neat-looking grave in Jackie's photograph. The cross was damaged, the plaque had shifted out of position and was cracked in half. As I straightened the plaque so I could see what was written there I noticed that my fingers were trembling. Even though my eyes had suddenly misted up, beneath the lichen and moss that now covered the plaque I could just make out my father's name and a date.
The Show: 29 ►

1/ : That morning I stared out the window of my hotel up at a mountain. 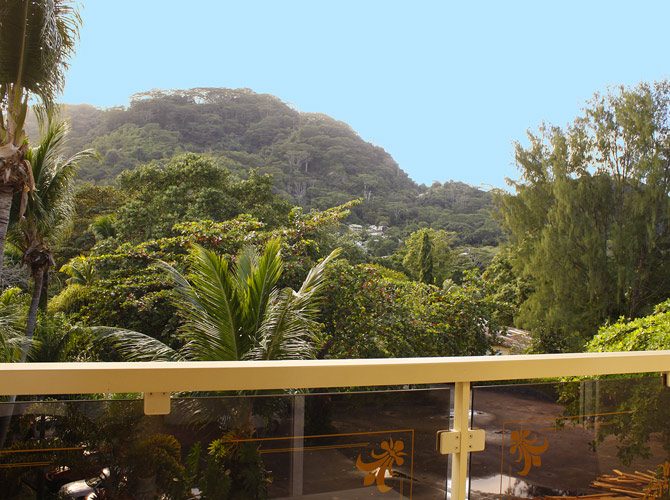 2/ : Mont Flourie. Very confusing if you don't know where to look! 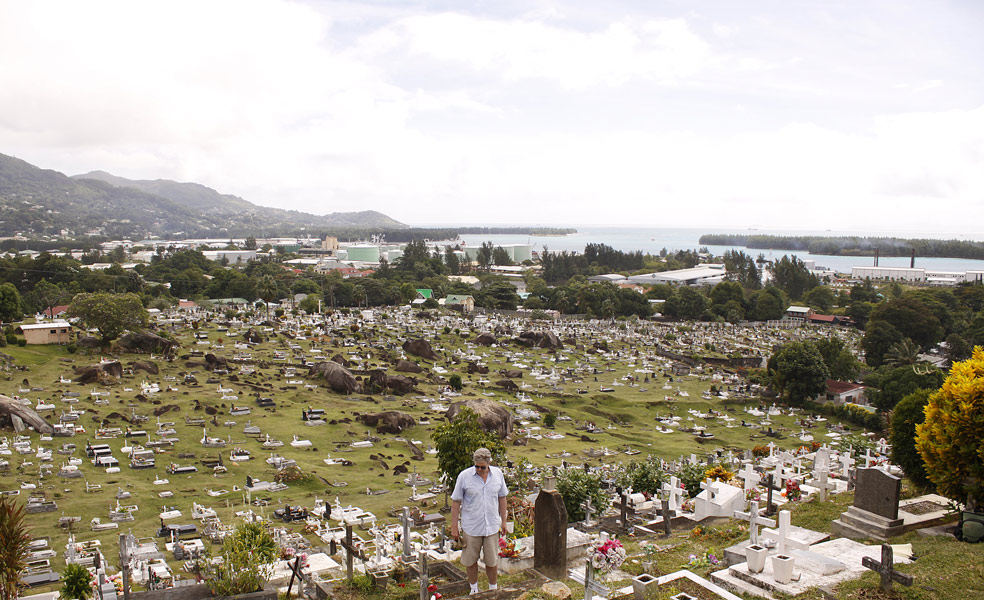 3/ : We wandered about looking for something that would match our photos. 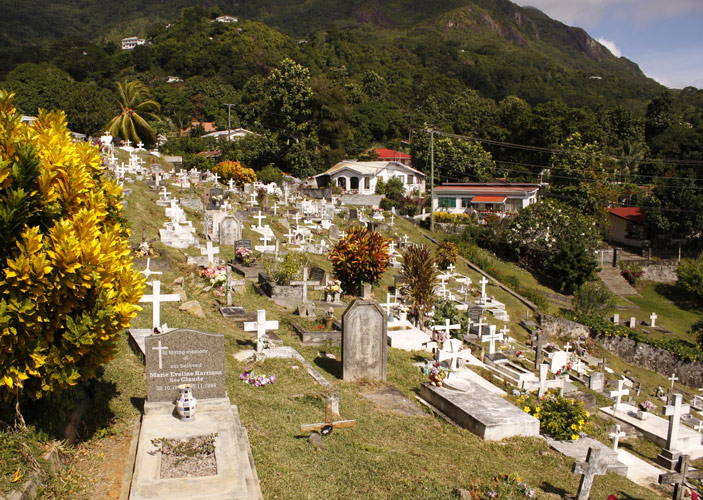 4/ : After two hours we were about to give up. Then this happened! 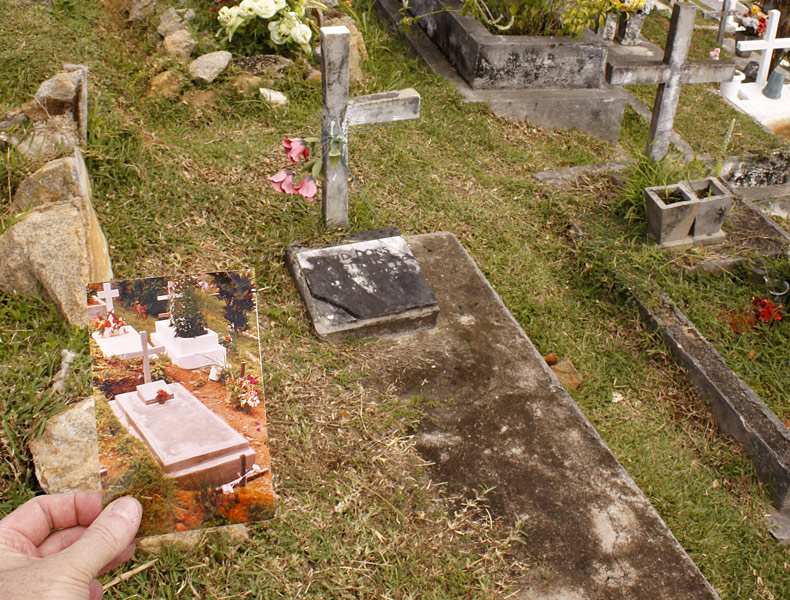 5/ : This was an emotional moment for me! 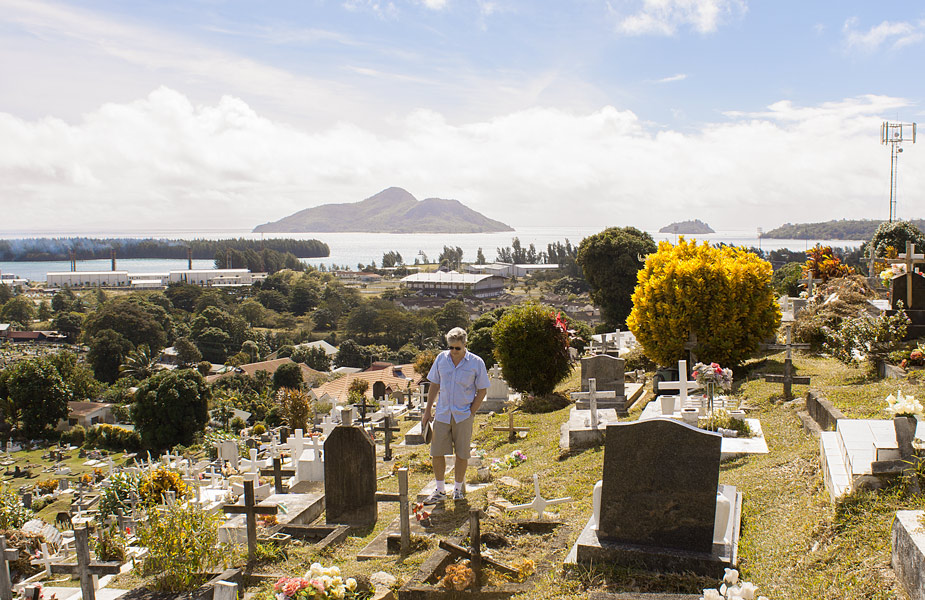 6/ : The plaque, so white in the photo was now almost illegible.

7/ : I moved the damaged plaque back into position. 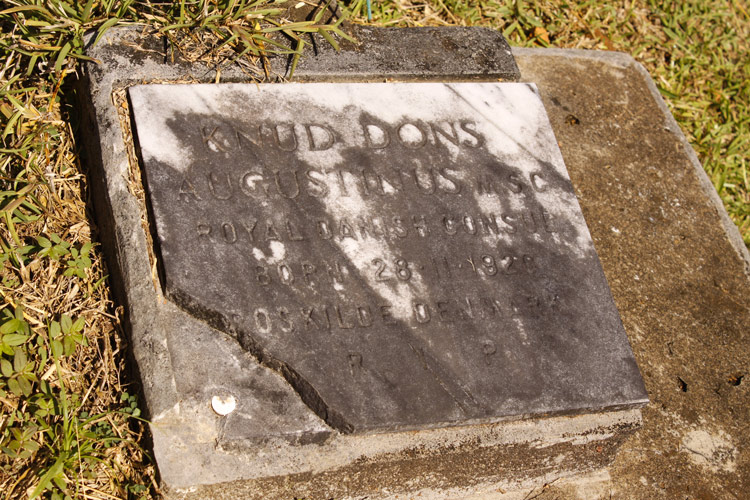 8/ : I left a Catalogue from my previous show on the grave. 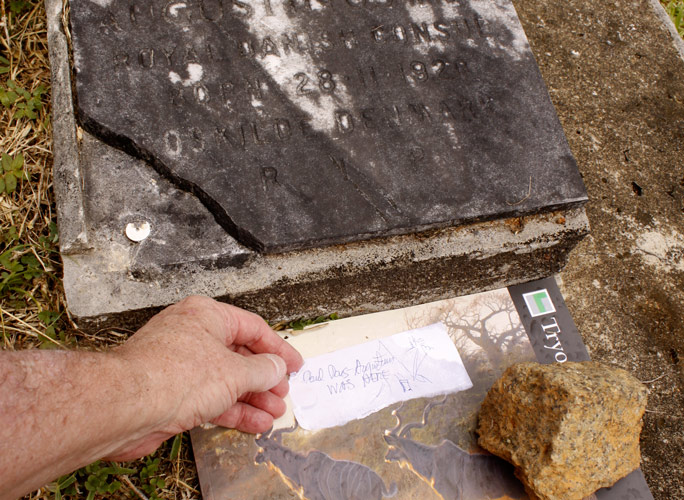 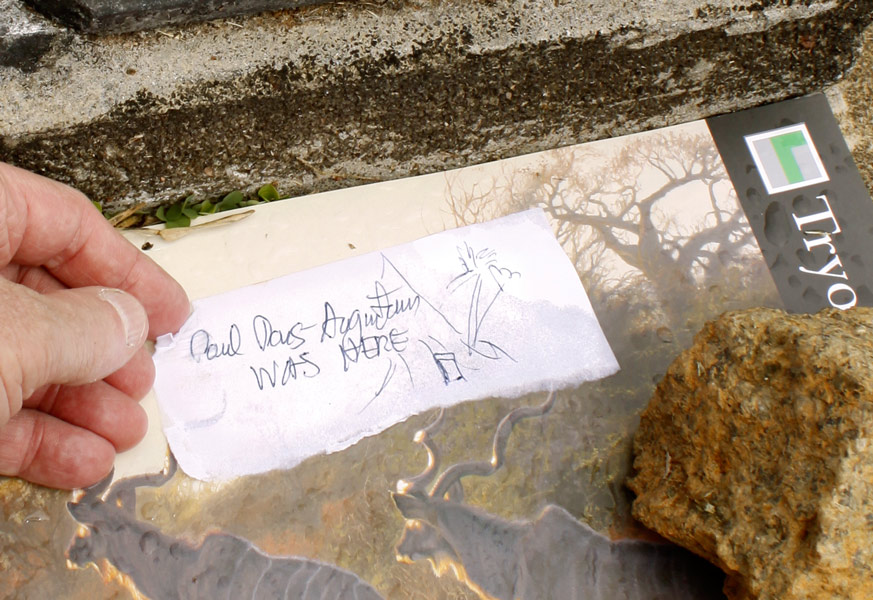 10/ : Then we visited a house where my father had lived - it was very evocative. 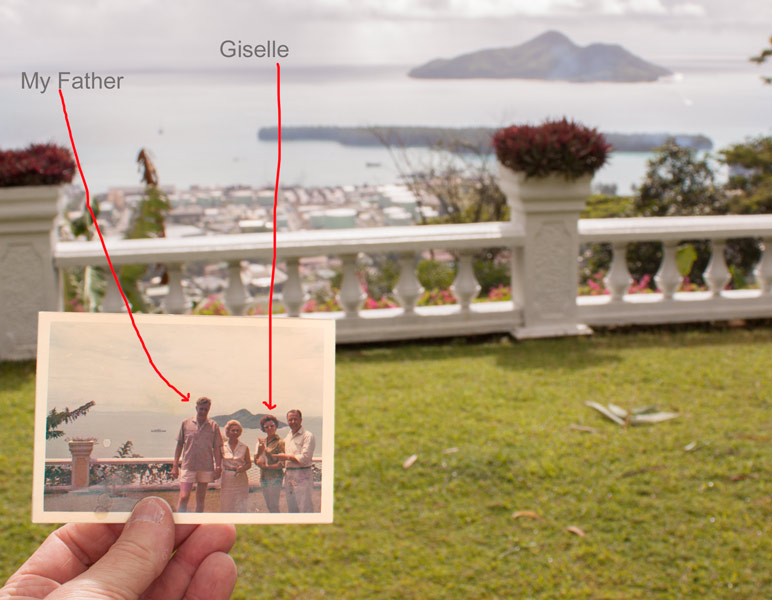 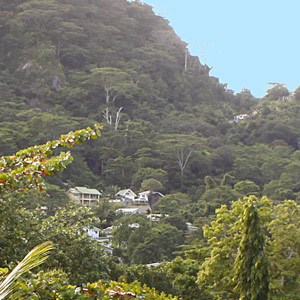 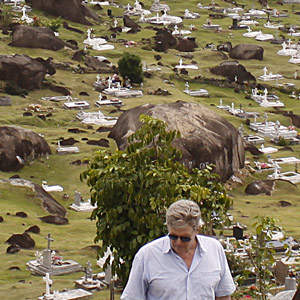 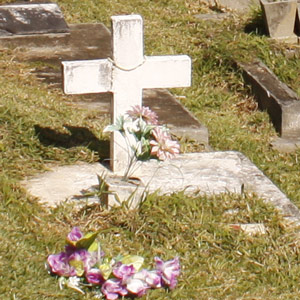 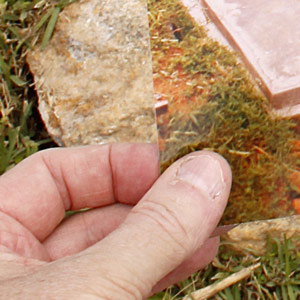 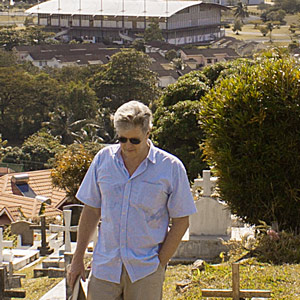 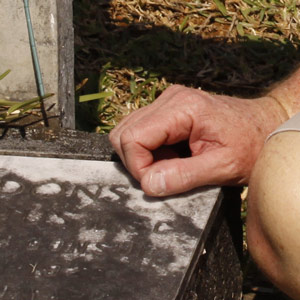 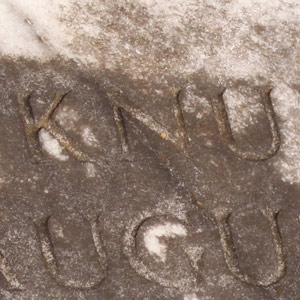 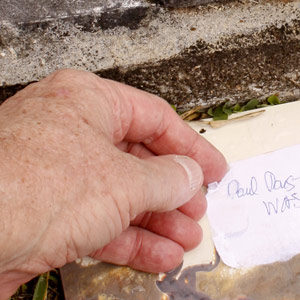 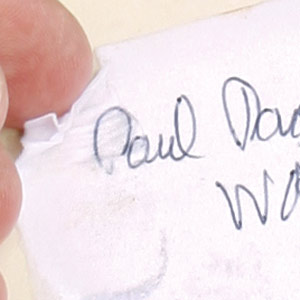 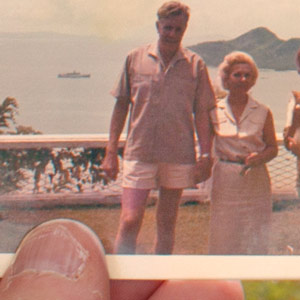