The old road from Serondella to Savuti traversed the Ngwezumba Valley. In 1979 I decided to go that way and see what was there. What a trip that was. The road had not been graded for 10 years and was blocked by fallen trees. But I had discovered a hidden paradise in Botswana. The Ngwezumba Pans and the Ngwezumba Polls had incredible populations and I had it virtually all to myself for a few short years. Ngwezumba only works if the previous rainy season had been good and the pans filled up to the point they last right to the end of the dry season. If not then the area has very little wildlife. I was lucky - when I had it to myself, the rains had been spectacular - so the wildlife was spectacular. To this very day Ngwezumba from 1979 to 1984 represents the finest wilderness I have ever experienced.

1/ : In 1979 the track down the Ngwezumba had degenerated into elephant paths. 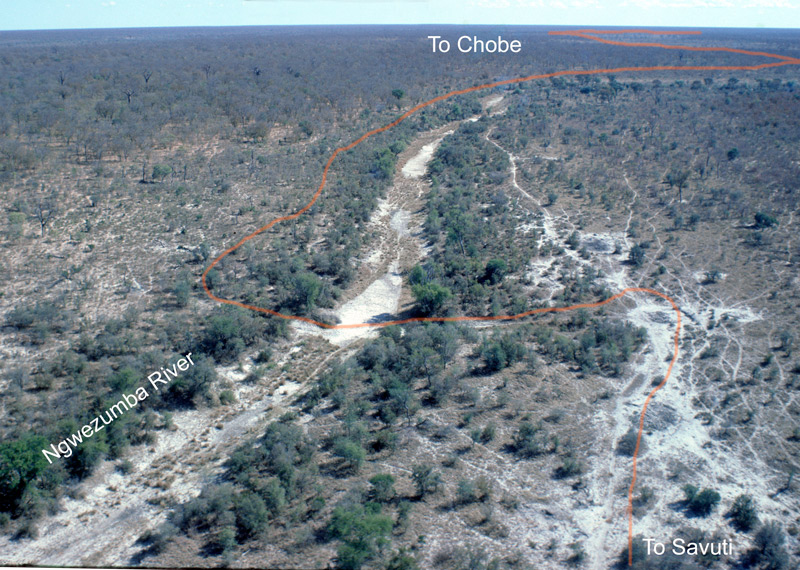 2/ : I camped for a few days at a pool on the Ngwezumba River. 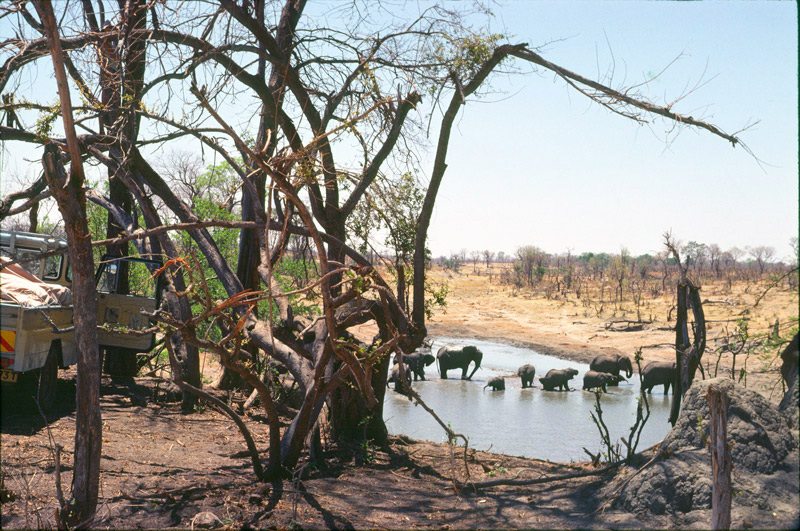 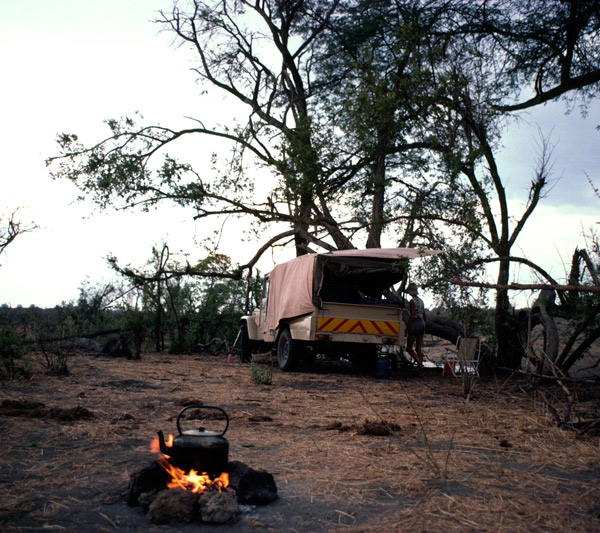 4/ : At the Ngwezumba Pools, huge herds of elephant would be coming and going at the same time. 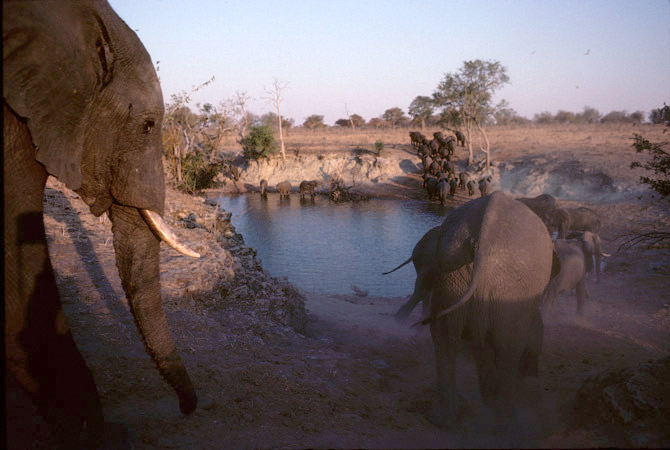 5/ : Walking along the riverbank you could approach animals without them being aware! 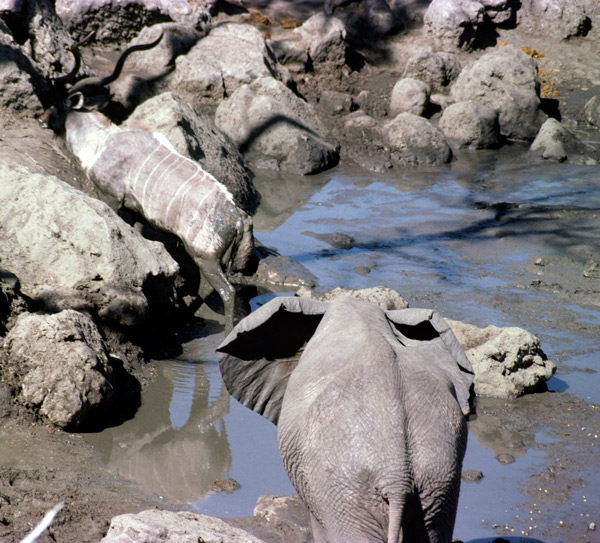 6/ : One could get very close to elephants drinking at the pools. 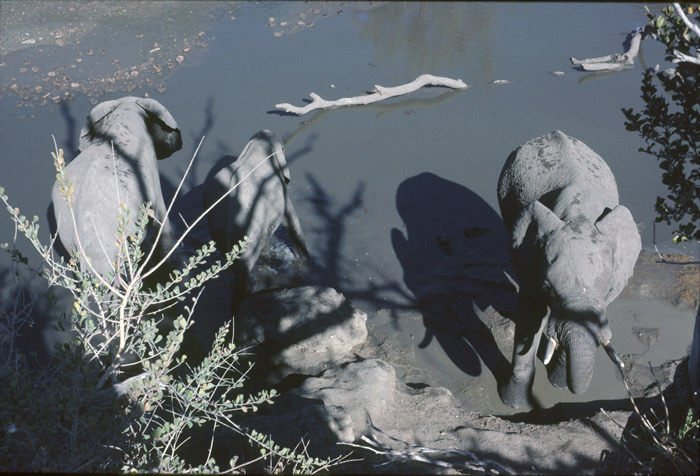 7/ : Then I moved over to the Ngwezumba Pans area and camped at Kwekampa for a while. 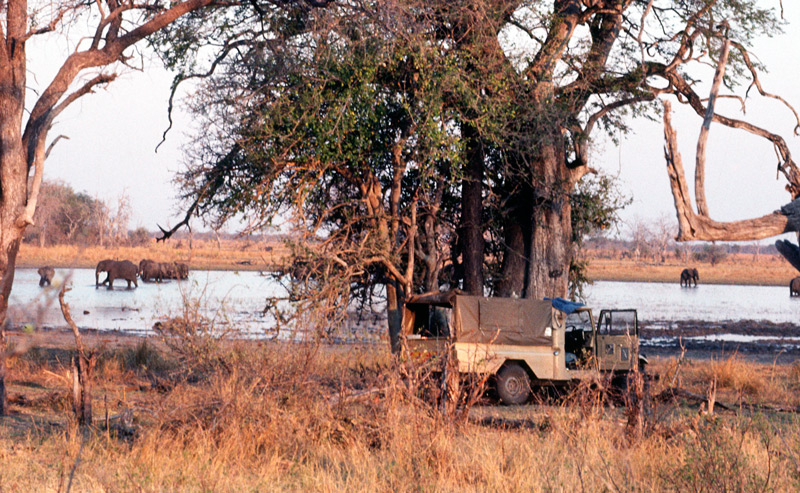 8/ : I climbed a tree to take this photo of hundreds of elephants at midday. 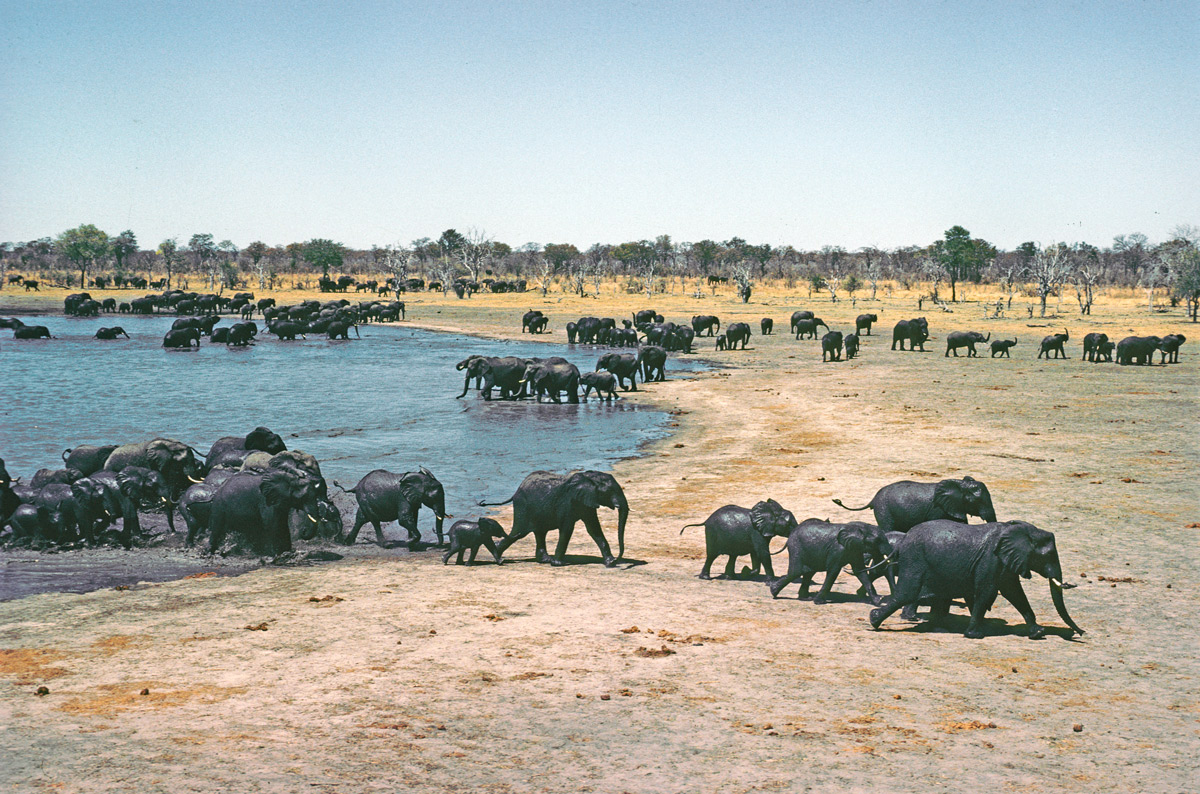 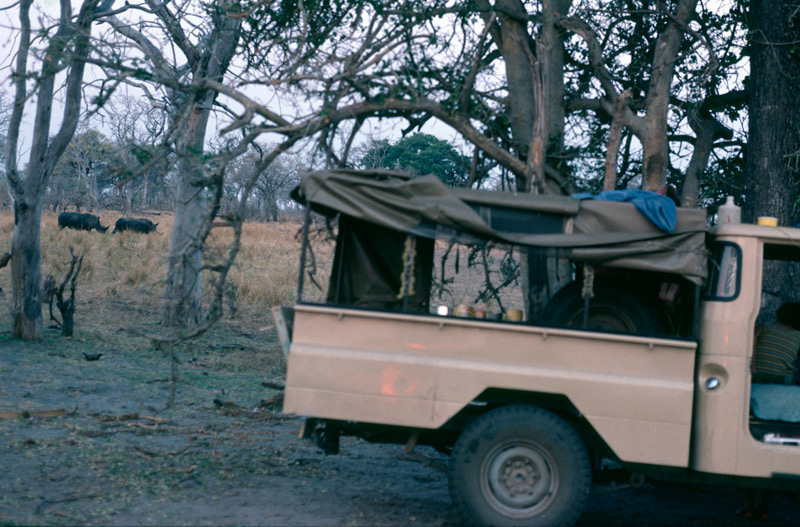 10/ : I had to collect water from the pan and then boil it to make it drinkable. 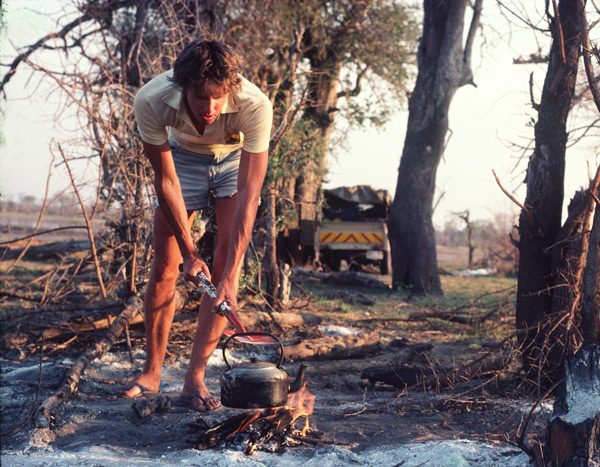 11/ : One night I forgot to take the kettle in. Lions came along and played with it and filled it with puncture holes. Luckily I had two kettles! 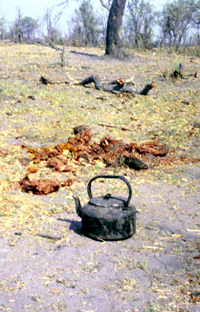 12/ : On other nights lions would pass by silently while they were hunting. 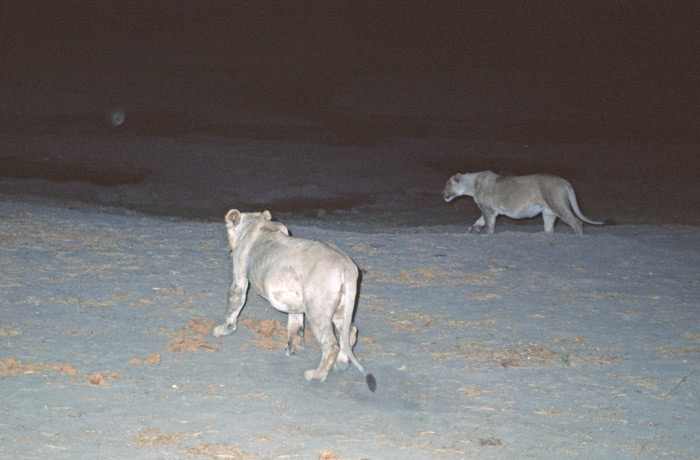 13/ : Buffalo came to drink every day. One morning I was ready for them and climbed a tree on the other side of the pan. 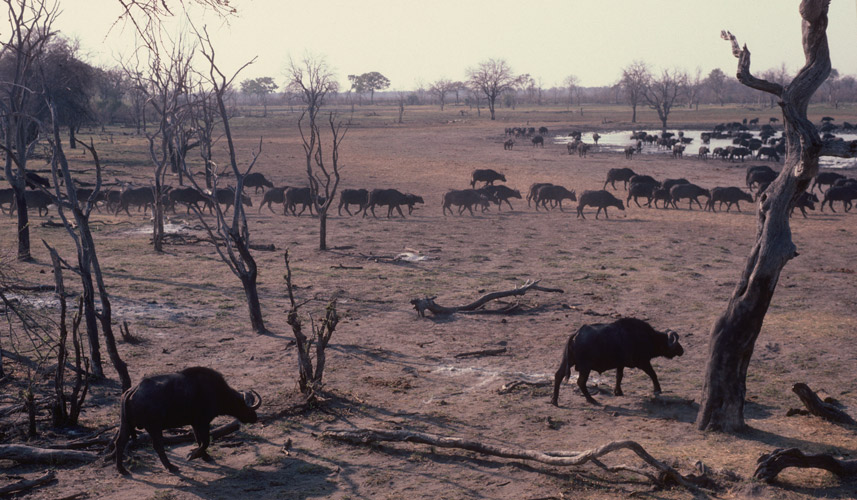 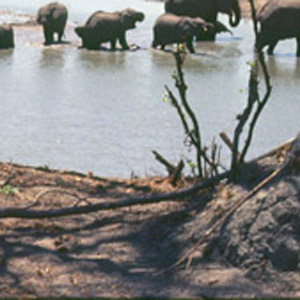 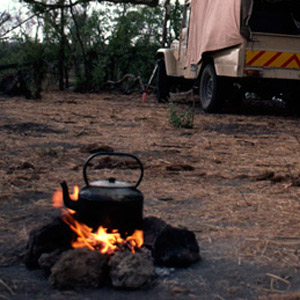 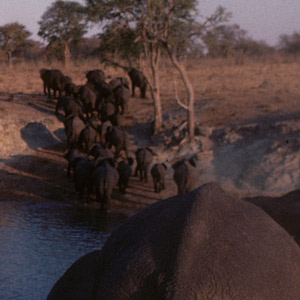 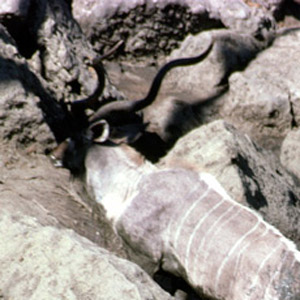 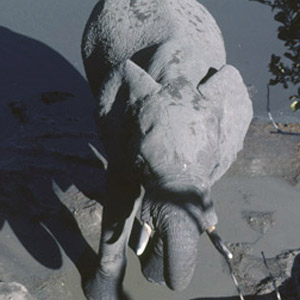 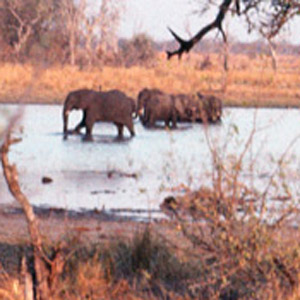 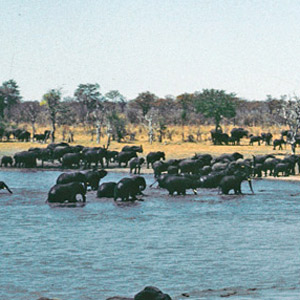 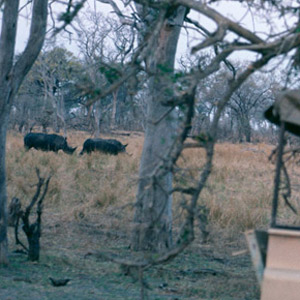 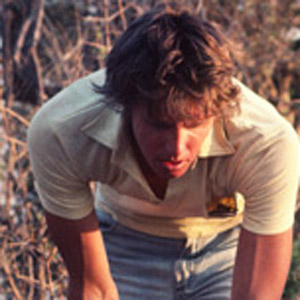 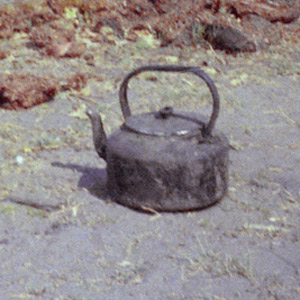 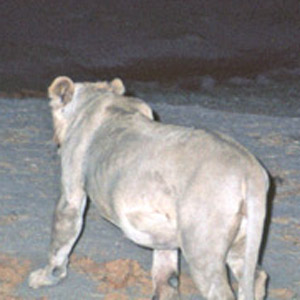 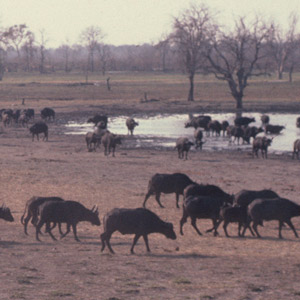