'These 'Nova Refugia' will be crucial in the distant future'

This work is one of a new series that I am now working on and they will be a celebration of the incredible wild places in Africa that I consider to be *refugia. I believe that these Nova refugia will be crucial in the distant future when humankind has begun to reverse the environmental catastrophe we are now experiencing. The location that inspired this particular painting fits that classification.
The scene depicted is of Damaraland which is a part of the Kaokoveldt in Namibia! This is where in the 1990s my wife and I spent three years wandering about this remote wilderness in our Toyota 4x4 vehicle. I was looking for black rhino and we found lots of them which is an adventure described in my book Desert Adventure. The rugged, semi-desert terrain here is the habitat of desert elephant, coastal lions and the elusive Kaokovelt black rhino. The very nature of the terrain means it is unsuitable for human activities and so this area will survive in the long term.


Clarissa and I had been searching this area for rhino via a tiny boulder-strewn track traversing the plain below the mountain that appears in the far background of the painting. The track followed a river valley but the deep gully which the river had eroded meant we could not see the actual river bed. Occasionally a splash of green vegetation poking up out of the plain belied the river's actual location. One day we drove over to one of these rare green 'outcrops' and drew up on the lip of a steep ravine. Below us there was a small but beautiful river gorge, with a boulder-strewn bed. A small pool of water had formed below one of the cliffs and above that a beautiful tree clung precariously to some rocks. As we were taking this all in two startled kudu materialized from the shadows of the oppsite cliff and watched us carefully. The next day I found a way to get us down into the river bed and that's where we camped for a while as I gathered ideas, sketches and designs for potential paintings. The painting below was made in my studio from those rescources.


*Refugia are island-like tracts where circumstances have allowed species to survive after extinction in surrounding areas. Ten thousand years ago, at the height of the last glaciation, the Congo basin was mostly dry savanna and the Namib desert dunes extended right up past the mouth of the Congo River. During that epoch two small rain forest 'refugia' patches survived. Eight thousand years ago, when the glacial epoch ended, these two refugia expanded outwards to become the vast equatorial rain forest belt of today which stretches from West Africa to the Rwenzori Mountains in East Africa. Although the term 'refugia' was coined to describe past events in Earth's history, the term now has modern significance as the definition of refugia is applicable to present-day extinctions and how we might bounce back from them. 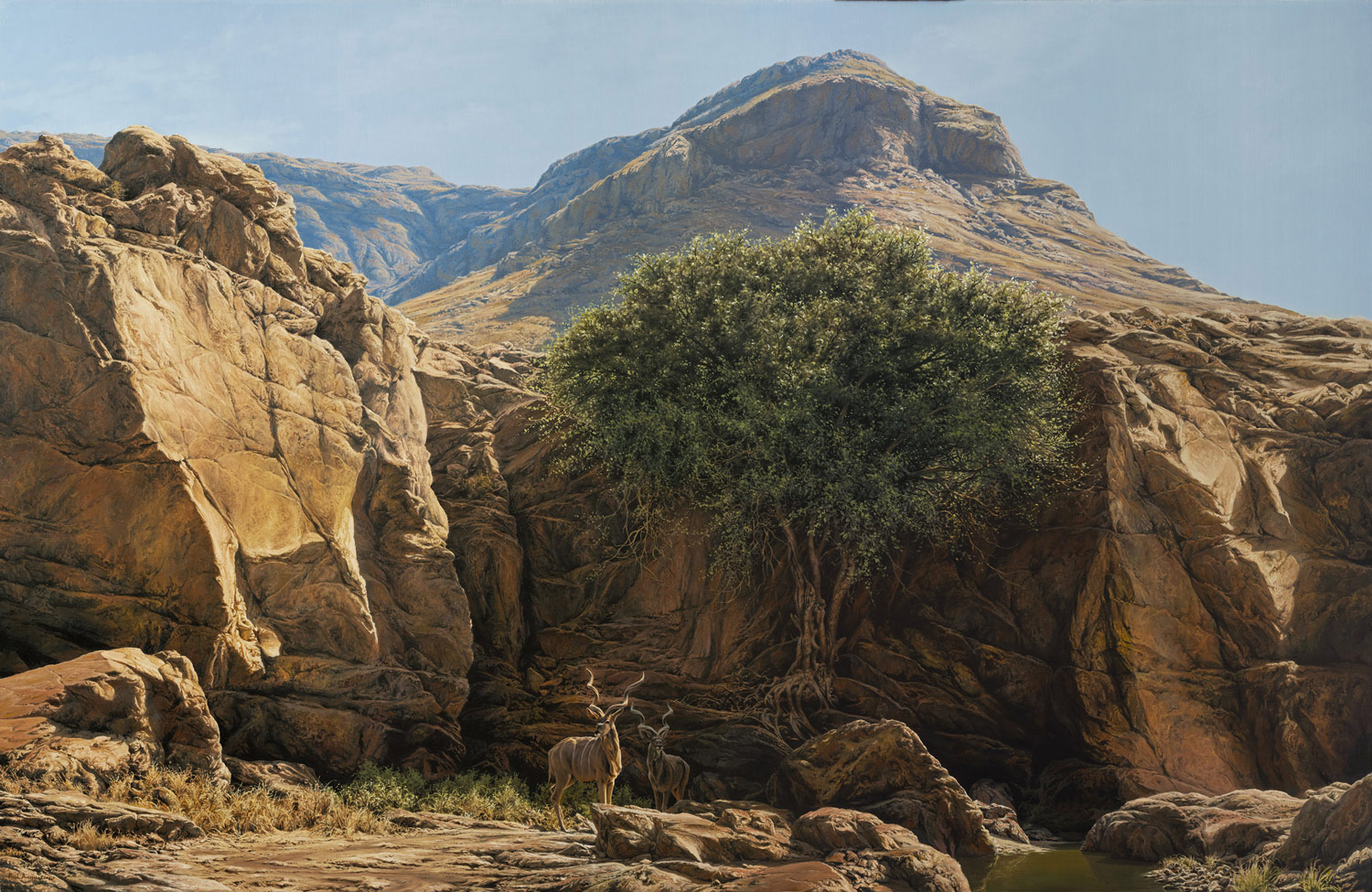