I have a BSc in Geology and graduated from Durban University in 1977. My mother insisted that I get a University degree saying that it would be useful (even if I never used it.) She was right about that - but for the wrong reasons! She thought that a BSc would be a fall-back for me if I didn't make it as an artist. Luckily I never needed that degree as a safety net and apart from one year as a geologist in the Karoo in 1978, I have worked for myself, with no boss and no employees since them. However my Geology degree was infinitely useful to me because it gave me a deep understanding of this planet and how it evolved to the present day. One of the most interesting nuggets of information I came across during my studies was about the world's many ice ages and how they affected the climate and ancient habitats. That's when I came across a reference to the two tiny ice-age rainforest refugia in the dry Congo basin from which grew the vast present-day rainforest of Africa's Equatorial region (see the reference below.) For the last eight thousand years the natural world dominated but now, in present day Anthropocene, it is everywhere rapidly shrinking into isolated refugia. The Masai Mara and its' adjoining conservation areas (Loliondo Game Reserve, Lamai Game Conservation Area, Serengeti, Ikorongo and Grumeti Game Reserves) make up one the most significant and important refugia in the world. This is a magnificent place where distance has a deep, emotional significance. A place where pristine grass stretches all the way to the horizon and is a home to millions of migrating animals and the predators that follow them. But it is also a refugia for something that is, maybe, almost as important - the abstract concept of 'wilderness!'


I am very lucky that both my parents ended up in East Africa in the 1940s because that meant that I grew up there and was exposed to this vast wilderness from a very early age and then again from 2003 onwards when we returned to East Africa to live there. My wife and I camped on the Mara in the Triangle for a few weeks every year. Sometimes our visits coincided with the fickle peaks of the wildebeest migration which was always awe-inspiring to observe. One day there would be millions of animals on a plain. But the next would reveal an empty grass plain stretching away to the horizon. Those empty plains never bothered me. I found them just as interesting as wildebeest, cheetah and lions because these endless grass plains evoke in me a primal understanding of how important wilderness is to me as a human. So, I believe that this ecosystem is a 'many-layered' refugia, one that will hopefully survive until that better epoch in the future when they will naturally expand outwards into surrounding lands as the human population comes down from it's peak. This painting depicts the plains below the Oloolo Escarpment - my favorite part of the Triangle.


*Refugia are island-like tracts where circumstances have allowed species to survive after extinction in surrounding areas. Ten thousand years ago, at the height of the last glaciation, the Congo basin was mostly dry savanna and the Namib desert dunes extended right up past the mouth of the Congo River. During that epoch two small rain forest 'refugia' patches survived. Eight thousand years ago, when the glacial epoch ended, these two refugia expanded outwards to become the vast equatorial rain forest belt of today which stretches from West Africa to the Rwenzori Mountains in East Africa. Although the term 'refugia' was coined to describe past events in Earth's history, the term now has modern significance as the definition of refugia is applicable to present-day extinctions and how we might bounce back from them. 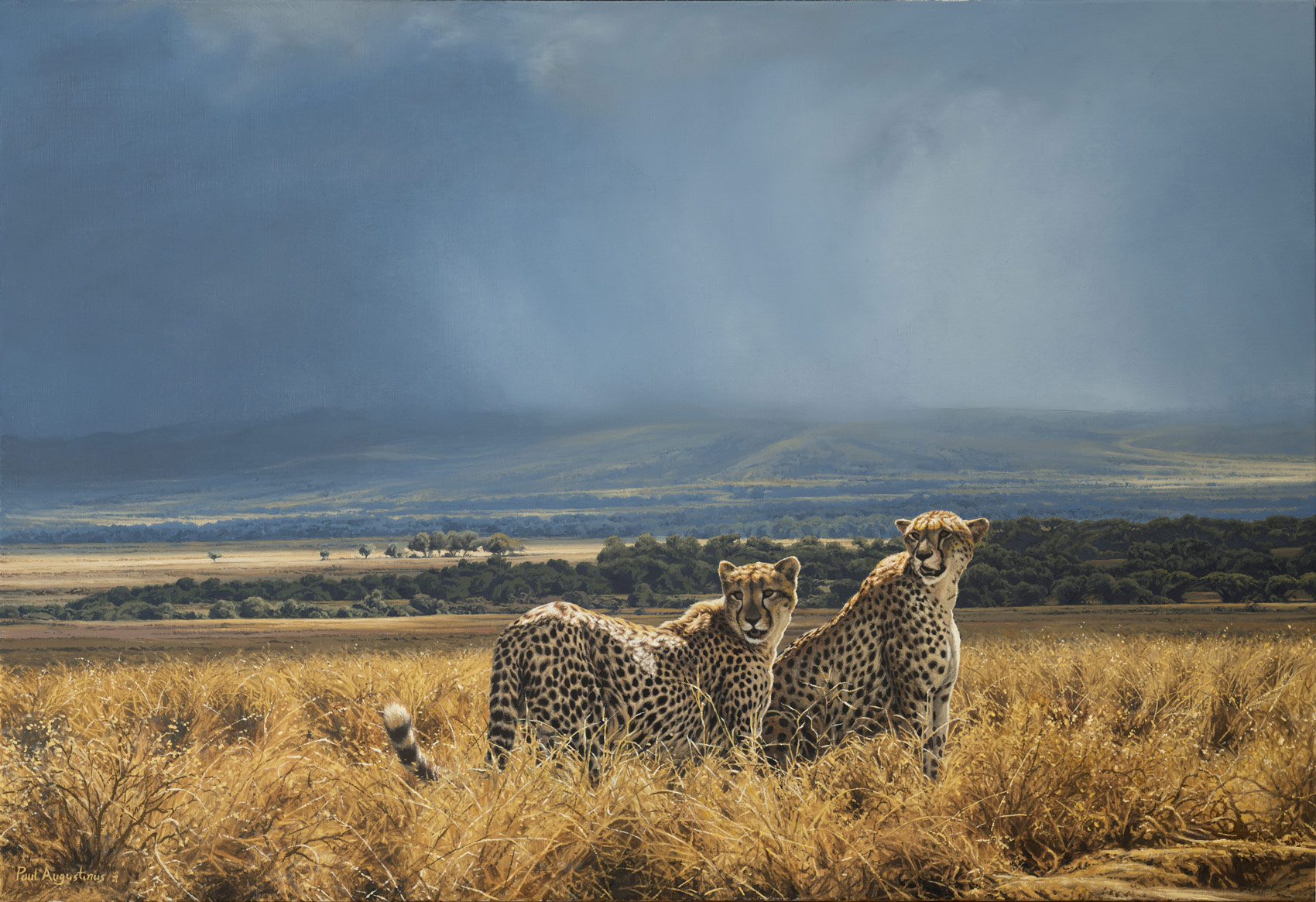